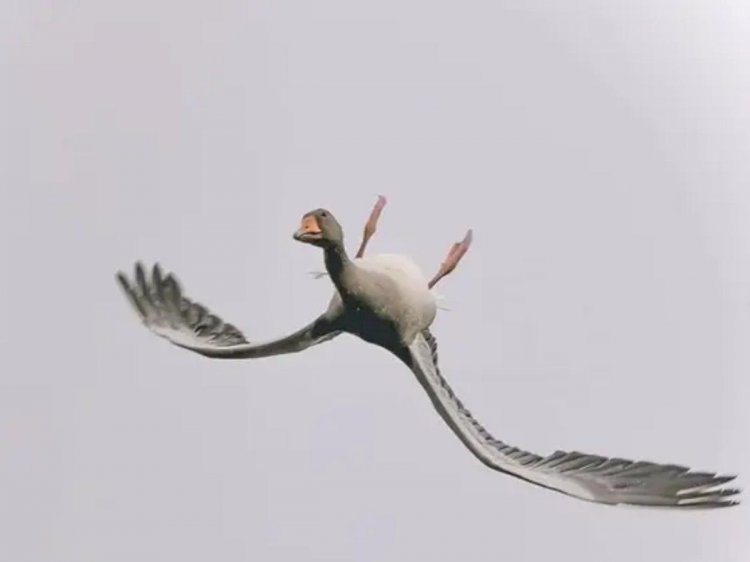 This photograph of a goose flying upside down with its head turned 180 degrees to face up almost looks unreal doesn't it? A photographer from Netherlands caught this rare topsy-turvy moment in the air.

If you observe a leaf falling to the ground from a tree. You will notice that it makes a zig-zag path while it is decending. The same trick is used by birds to control their flight path in the air.

Ornithologists (scientists who study birds) use a term, whiffling, for when birds use a side-slipping (zig-zag) path while lowering themselves during their flight. So flying upside down can be a part of whiffling. Turning down its wings causes a down-force that helps slow down the speed of the bird.

Another use of whiffling by geese is to avoid predators.

It is interesting to know, sometimes birds can also just be showing off by flying upside down in the sky!

Do you know what Aerodynamics is?

Aerodynamics is the study of how gases interact with moving bodies. Since the gas that we encounter most is air, aerodynamics is primarily deals with the forces of drag and lift, which are caused by air passing over and around solid bodies.

Fun Fact: The bird in the image is a grey Bean goose. Biggest Bang Since The Big Bang

Two black holes merged in space and the ripples were felt on Earth. The results of this extraordinary phenomenon were recently published in a scientific journal. LIGO and VIRGO collaborations studied the gravitational waves released due to this massive collision in space. Learn about black holes with this article.

This slimy overgrowth is the result of global warming and it is creating havoc in Turkey. Do you know what Sea Snot is?